How to Reset or Recover Windows SYSKEY Passwords

Some 22 years ago, Microsoft made an attempt to make Windows more secure by adding an extra layer of protection. The SAM Lock Tool, commonly known as SYSKEY (the name of its executable file), was used to encrypt the content of the Windows Security Account Manager (SAM) database. The encryption was using a 128-bit RC4 encryption key.

The user had an option to specify a password that would protect authentication credentials of Windows accounts stored in the SAM database. If SYSKEY password was set, Windows would ask for this password during startup before displaying the login and password prompt.

While SYSKEY was not using the strongest encryption, attacking (brute-forcing or resetting) the user’s Windows login and password would not be possible without first decrypting the SAM database. As a result, a SYSKEY password would require the attacker to brute-force or reset SYSKEY protection prior to accessing the system’s Windows accounts. More importantly, an unknown SYSKEY password would prevent the user’s system from fully booting. This fact was widely exploited by ransomware and commonly abused by “tech support” scammers who locked victims out of their own computers via fake “tech support” calls.

Due to SAM database encryption, reinstalling or repairing Windows would not solve the issue unless the user had access to a recent backup or a System Restore Point. For this reason, Microsoft removed the ability to set SYSKEY passwords in Windows 10 (release 1709) and Windows Server 2016 (release 1709), steering users towards the much more secure BitLocker encryption instead. However, older systems are still susceptible to SYSKEY ransomware attacks.

Since SYSKEY protection is fairly old by hi-tech standards, it is no longer secure (it never been in the first place). Victims of SYSKEY ransomware or “tech support” scammers can now restore their systems by recovering or resetting SYSKEY password. Elcomsoft System Recovery has the ability to discover or reset SYSKEY passwords in order to restore the system’s normal boot operation. This is also the first time ever we’re publishing screen shots of the Elcomsoft System Recovery user interface.

SYSKEY encryption is a relatively little known feature that was actively exploited by “tech support” scammers and ransomware. Once a SYSTEM password is activated, the entire SAM registry hive is encrypted. This makes it difficult to restore Windows to working condition, especially if the scammer has also removed all System Restore points. Victims of this scam will see the following message when they attempt to start their computer:

“This computer is configured to require a password in order to start up.”

In order to remove an unknown SYSKEY password, do the following.

If a potential issue is discovered, you will see the following warning: 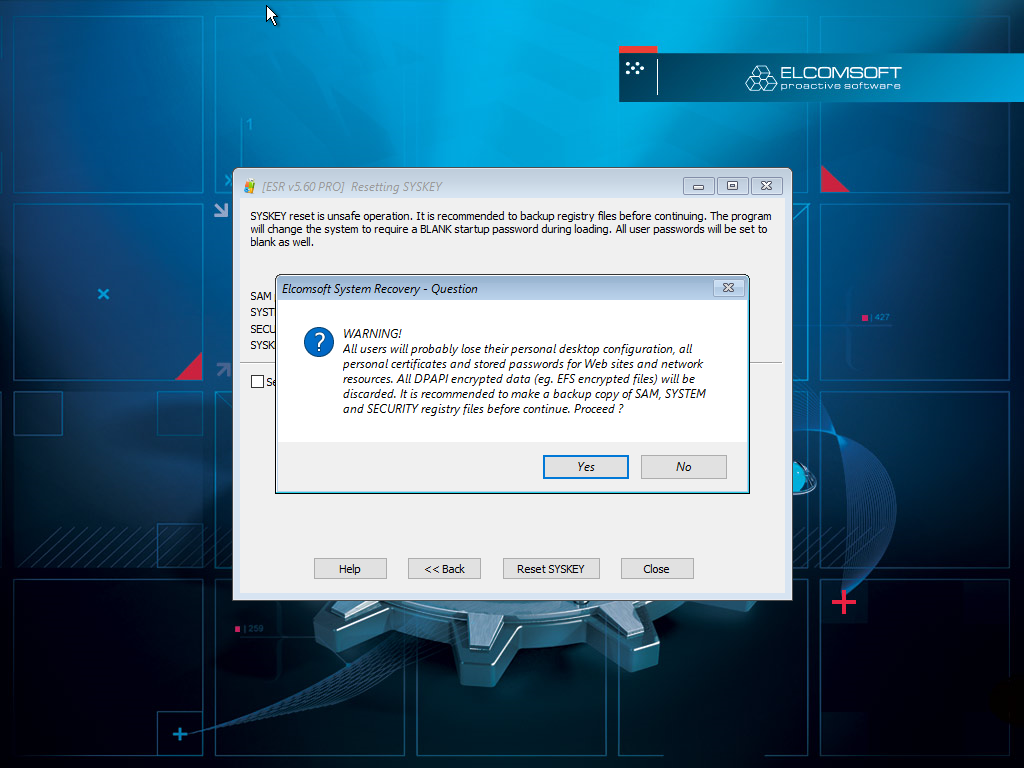 If you proceed, you will lose access to DPAPI encrypted data (EFS-encrypted files and folders). In addition, we recommend that you make backup copies of SAM, SYSTEM and SECURITY registry hives (this must be done manually).

In order to look up for SYSKEY password, do the following: